The renovation of metro line 3 reached a milestone, said István Tarlós, Mayor of Budapest on the handover ceremony. The weeks of testing and trial runs between Újpest-központ and Dózsa György út stations were successful. Passengers can travel on the renovated section from Saturday afternoon. 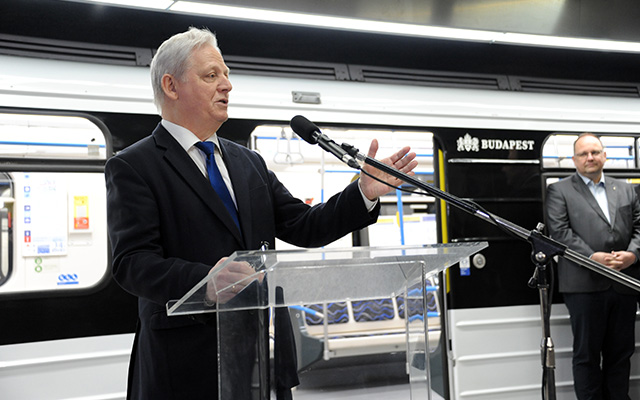 István Tarlós pointed out: metro line 3, which is more than 17 kilometers long, is the largest railway system in Hungary, with more than 500,000 passengers on workdays. This is more than the entire national rail network, he added. The role of the subway line connecting the northern and southern parts of Pest is unquestionable - he added.

István Tarlós said that metro line 3 was built between 1970 and 1990 and did not undergo any major renovation until the present reconstruction. The construction works, the rolling stock had to be renewed, the technical capacity of the equipment and their lifetime reached their limits. Renovation could not be delayed, he said. He reminded that metro line 3 subway cars had been renovated before. The capital wanted them brand new, but the government supported only the restoration of the old ones, said the Mayor.

István Tarlós said that the construction works on the northern section of metro line 3 started on 6 November 2017. During the renovation, all systems were upgraded, the station were made accessible, and architecturally transformed. The northern section has a completely renewed passenger information system, modern LED lights, and CCTV system were installed at all 6 stations of Újpest-központ, Újpest-városkapu, Gyöngyösi utca, Forgách utca, Árpád híd and Dózsa György út to enhance passenger safety. Escalators and elevators were also built.

At the stations, a fire protection system - with the latest regulations and modern ventilation - and heat and smoke extraction systems have been installed. In addition to the passenger areas, the service areas were also renewed. The length of the new power cables reaches 500 kilometers. As part of the reconstruction, the railway track was rebuilt, with 5.5 kilometers of line between Újpest-központ and Dózsa György út stations. This meant the demolition and installation of 21.5 kilometers of rail and 11 detours.

In addition, the automatic train control (ATC) system that BKV itself has implemented, has been renewed. Speaking of accessibility, István Tarlós pointed out that while metro line M2 was refurbished, only two stations were made barrier-free, while in metro line 3 all the stations will be made accessible to everyone.

In order to ensure equal opportunities of travel for the blind and visually impaired, there are tactile lines at the stations and loud information devices at the entrances to the escalators, he said. István Tarlós recalled that at the meeting of the Municipality of Budapest on 25 August 2014, representatives adopted a proposal for the renovation of both the infrastructure and the fleet of metro line M3. According to a government decree of 2016, the grant amount of the project was HUF 137.5 billion.

As he said, he had to reject the "unreasonably expensive" offers twice. In the meantime, the European Union has spent much more on the eligible costs, and so only the amount of EU support amounted to HUF 172 billion. The cost of the reconstruction of metro line M3 is HUF 217.5 billion. According to an agreement with Prime Minister Viktor Orbán on November 17, 2018, the government provided an additional HUF 80 billion support atop the original 137.5 billion forints for renovation, István Tarlós pointed out.

István Tarlós also pointed out that they had received a lot of criticism, especially from those who had for decades failed to deal with the situation of metro line M3. He also mentioned that BKV had an operating debt of HUF 78 billion by 2010, which was taken over by the government in the summer of 2015. Until the cessation of the operating loan portfolio, no legal obligation to renovate could be made by law, said the Mayor.